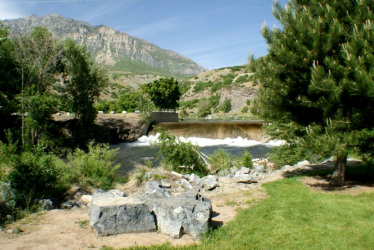 Provo River Spillway - Canyon View Park Utah
Birdwatching at Canyon View Park UT
Start birding by checking the base of the spillway at the small reservoir on the east side of Canyon View Park, just past the playground. Follow the river's course, staying close to the river to scan trees, brush, and banks for foraging birds, watching both sides of the river for activity. Once you have passed the picnic areas, the trail stays close to the river for easy bird watching. Continue along the trail on the south side of the river, scanning trees and occasionally watching the skies or cliffs for additional birds. Just east of the first picnic area is a small marsh area that can also be productive. 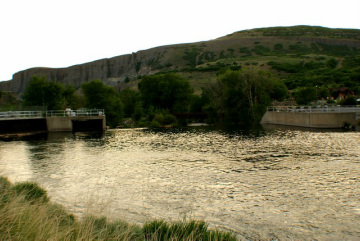 Canyon View Park Birdwatching Loop - Provo UT
Search Both Side of Provo River
After approximately one-half mile, the trail curves north across a bridge. After crossing, turn east to return to the park area, birding along the trees on both sides of the trail. This is part of the Provo River Trail and is likely to be more crowded with joggers and bikers, so be cautious and courteous of other guests.

Toward the end of the trail, Mt. Timpanogos Park will be on the north side and you can bird through that park or stay on the lower section of the trail until returning to the reservoir area. Check the upper area of the reservoir for additional birds before crossing the bridge and returning to the picnic and playground areas of Canyon View Park.  Plan 1-2 hours to bird watch near Canyon View Park  Article Courtesy of Examiner.com

The American Dipper on the Provo River 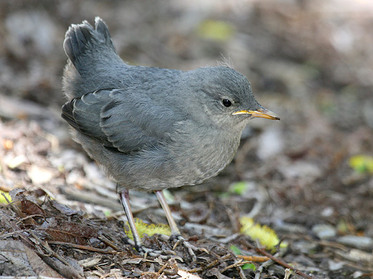 There are only five dipper species in the world, and birders in Utah County are privileged to have a great location to spot the only dipper in North America: the American Dipper.

The American dipper is North America's only aquatic songbird, and while it is relatively plain with allover gray or gray-brown plumage, pale legs and white eyelids (visible when it blinks), the bird is easily recognized by its stubby tail, small bill, and “dipping” behavior. These birds forage along active, rocky streams and rivers in the Rocky Mountain west, with a range that extends as far north as Alaska. They perch on low rocks in the water and will bob and dip while perched before plunging directly into the water to fly and swim underwater in search of aquatic insects. They are as active as the waterways they inhabit, and can be hard to see because they blend in well with splashing water and wet rocks. In flight, they stay low above the water and fly along the river's course with rapid wing beats. 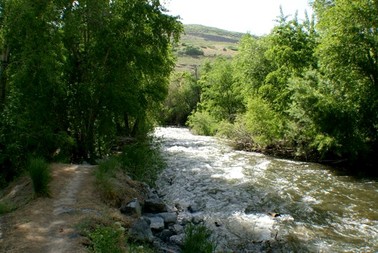 Finding American Dippers in Utah County
Birders in Utah County don't have to go far to find American dippers. These small songbirds are easily found along the Provo River where it passes Canyon View Park and Mt. Timpanogos Park in Provo Canyon. Check just below the small dam at Canyon View Park, scanning the rocky edges of the river for a moving, bobbing rock – that is what American Dippers look like! They can also be found further west along that same section of the river, and occasionally are found further east, closer to Bridal Veil Falls but where the river is still shallow and active. They are rarely seen at the falls themselves, because they tend to stay further away from crowded areas.

American Dippers are found in Utah County year-round, but are easiest to see in spring and fall outside the nesting season when they are more active. In the late summer, fortunate birders may spot entire families of dippers – juvenile birds have lighter edging to their feathers – learning to forage along the river's edge, and in winter, they are just as happy in the icy edges of the river as they are in the summer. 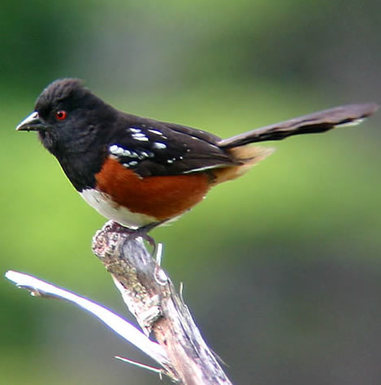 Spotted Towhee - Provo River Utah
Birds to See at Canyon View Park:
Depending on the season and time of day, more than two dozen bird species can be seen along this small trail loop from Canyon View Park, including: